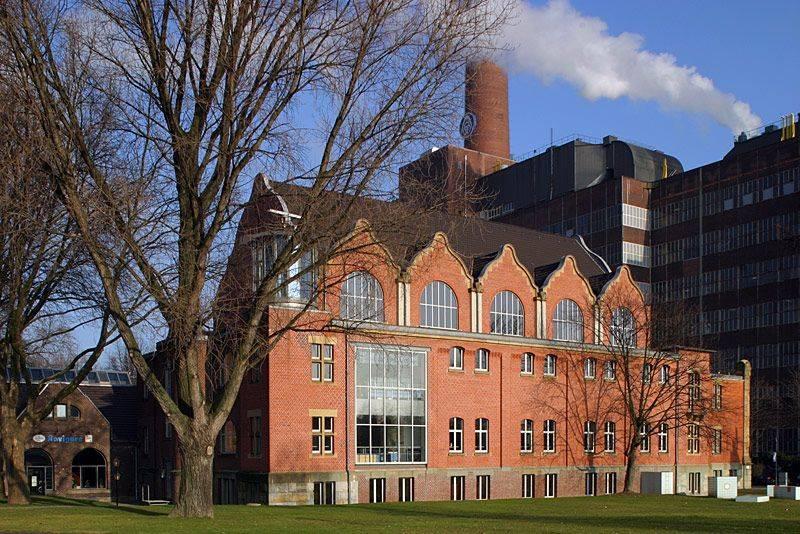 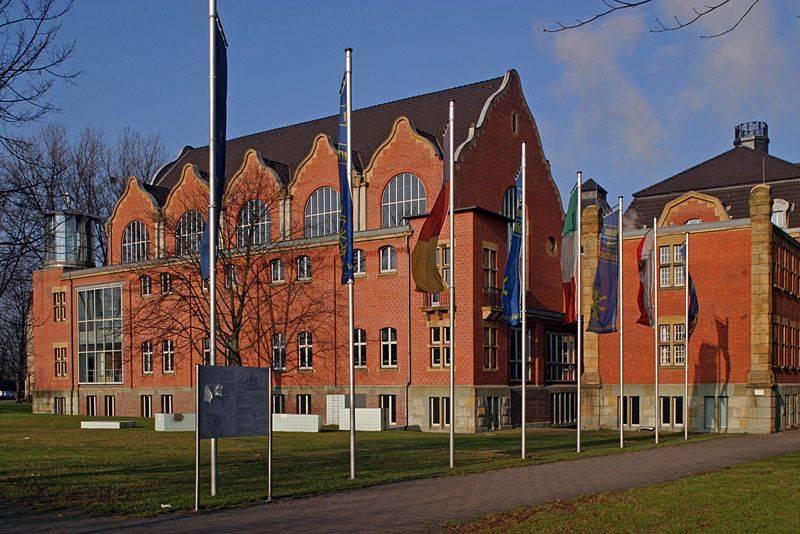 Ruhrort owes its indoor swimming pool to the donation of Mr and Mrs Eduard Carp and Alma, nee Haniel, of RM 10,000. The large, multi-part brickstone is now overshadowed by the Thyssen power station "Hermann Wenzel". Its decorative art nouveau architecture with cambered gables contrasts with the industrial building’s clear block structure. The plans were drawn up by Ruhrort building officer August Jording in 1908; it was opened in 1910.
A joint entrance wing provided access to the pools; the larger on the left for men, the smaller on the right for women. The higher construction costs notwithstanding, the planners had decided on separate indoor swimming pools baths for men and women for reasons of morality.
Originally planned symmetrically, for reasons of costs only the bath wing on the left was realised. The art nouveau tiles are extant. At the time revolutionary features, there were electrical lights and ventilation and floor heating.
The indoor swimming pool survived WW II intact. The modernisation in the 1950s and 1960s added colourful decorations, e.g. a ceramic mural by Ernst Kreetz at the front of the small indoor swimming pool.
The indoor swimming pool was closed in 1985 and then converted into the Museum der Deutschen Binnenschifffahrt for the Internationale Bauausstellung Emscherpark. This very carefully executed conversion was seen to by architekturfabrik aachen afa, who had won the competition in conjunction with artist Ron Bernstein. The exterior has remained almost unchanged, with the exception of a large two-floor window at Deichstraße and has regained its architectural qualities.
The museum very vividly displays the history of inland water transportation from the beginning until now from a technical and socio-historical point of view. The first, large building’s eye-catcher, “anchoring” in the former men’s pool, is the cargo sail ship Goede Verwachting from 1913.
In the second, the women’s pool, a walkable reconstruction of a barge gives an impression of how people lived and worked on such vessels. And, over three floors, there is also an exhibition of pre-historic vessels, sail ships and steam boats, modern tugboats and container ships.