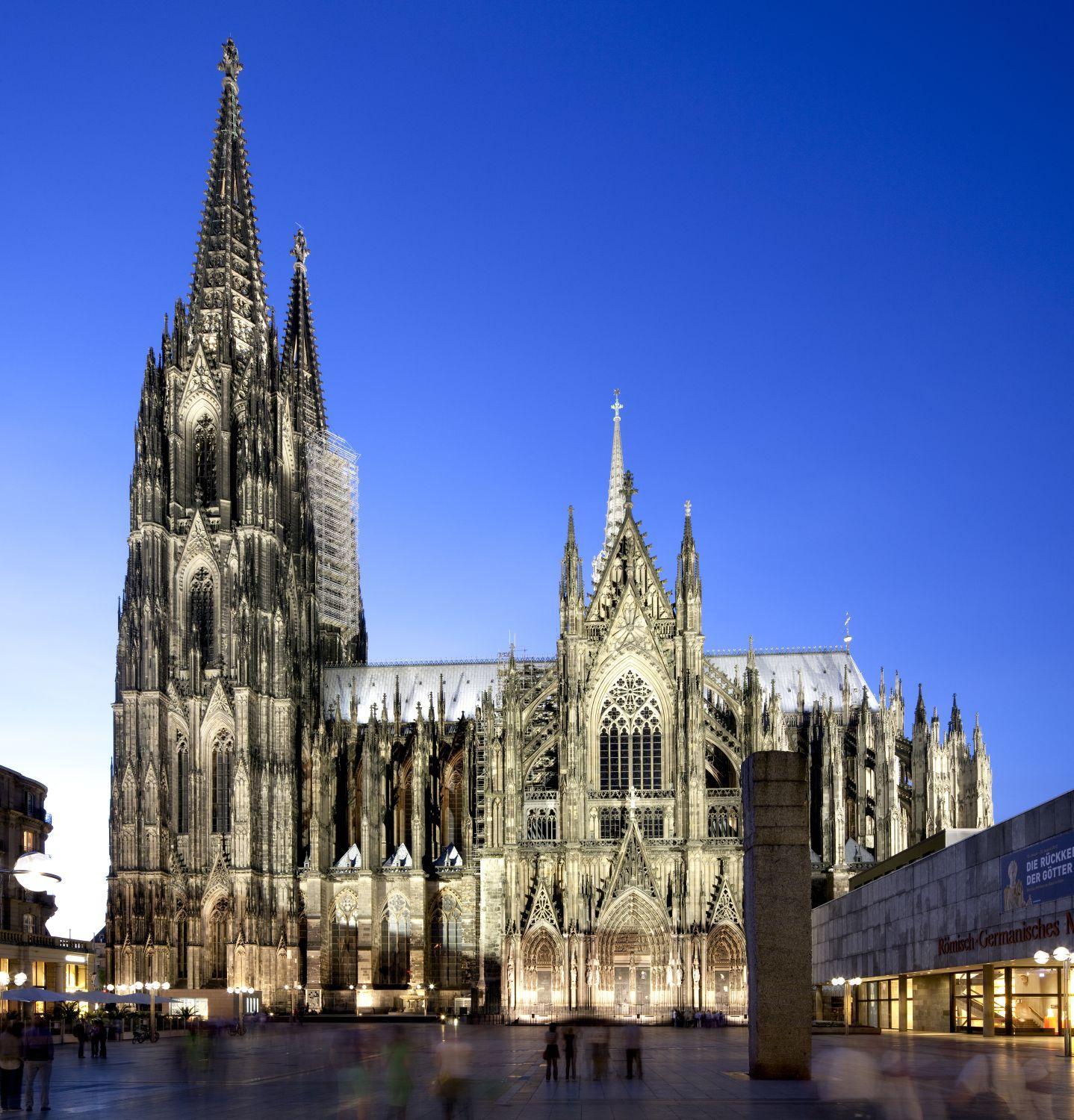 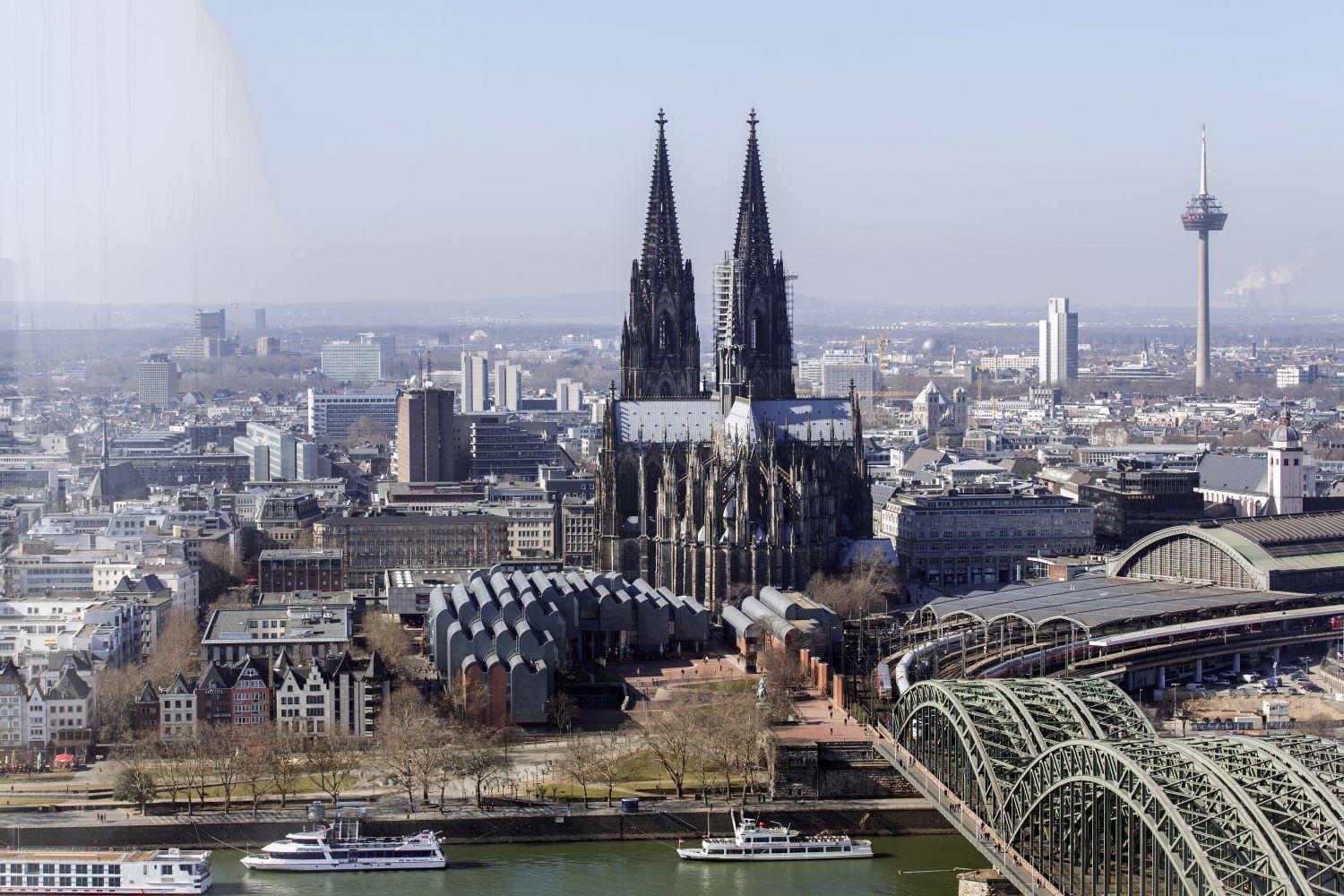 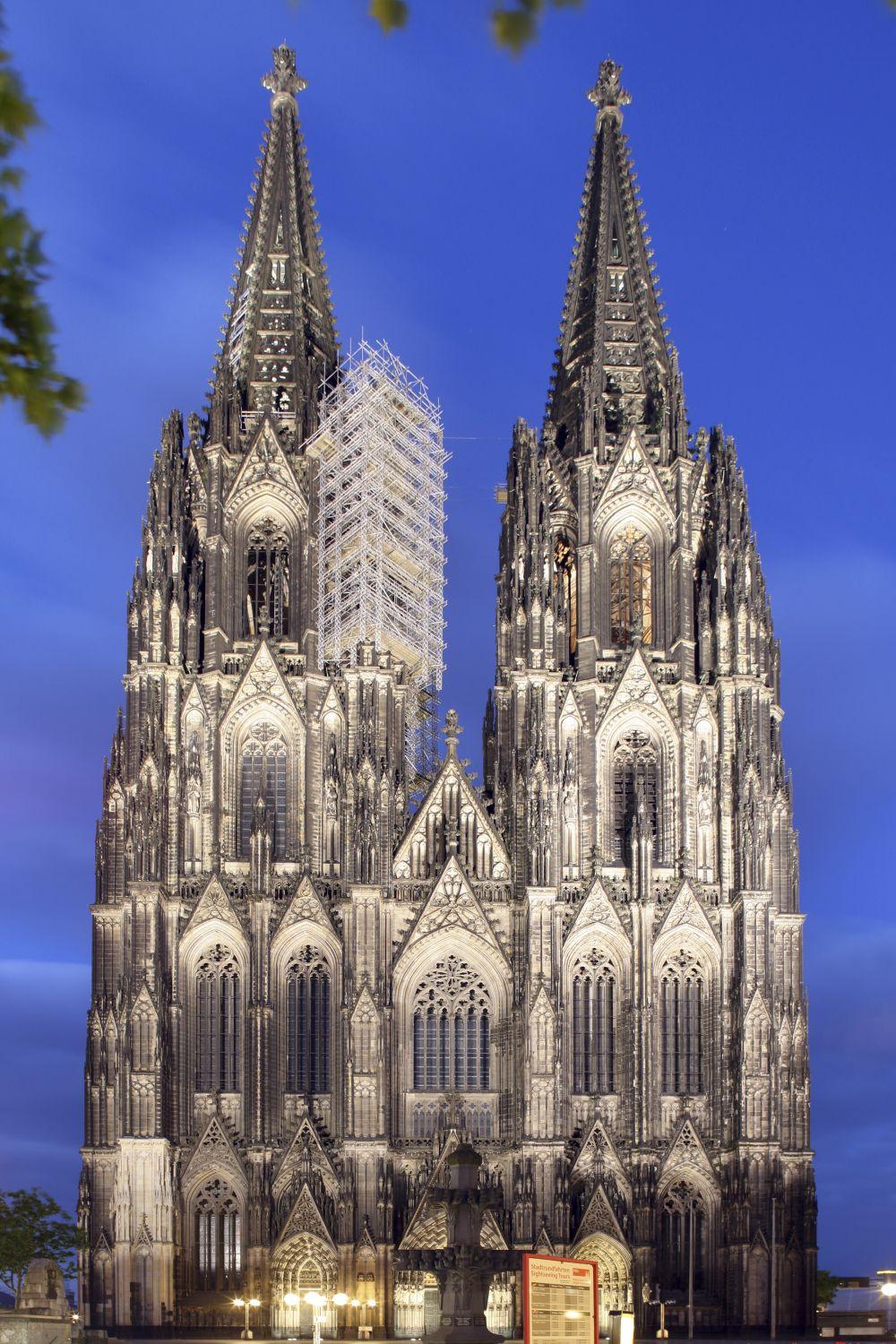 Kölner Dom view from the east 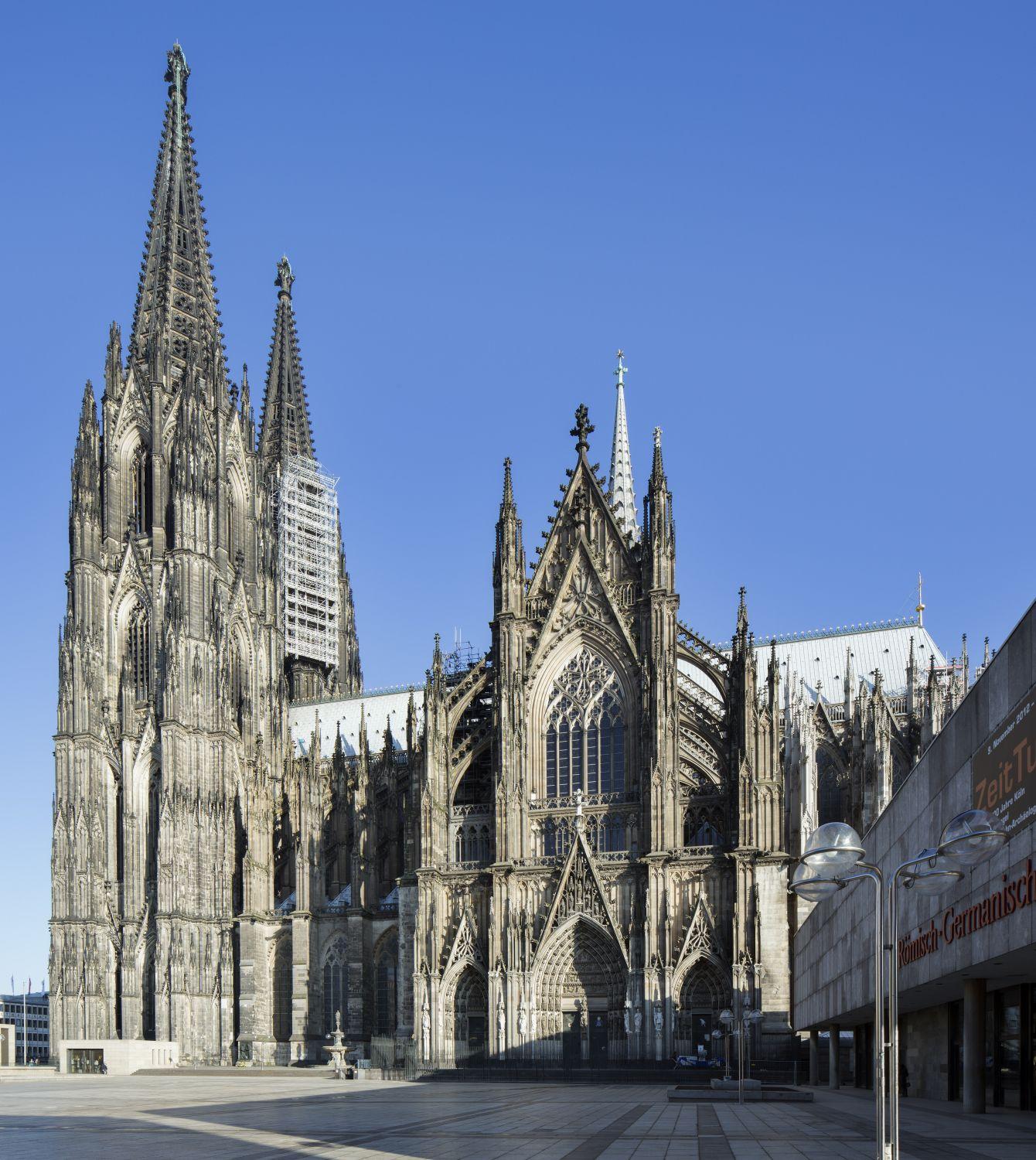 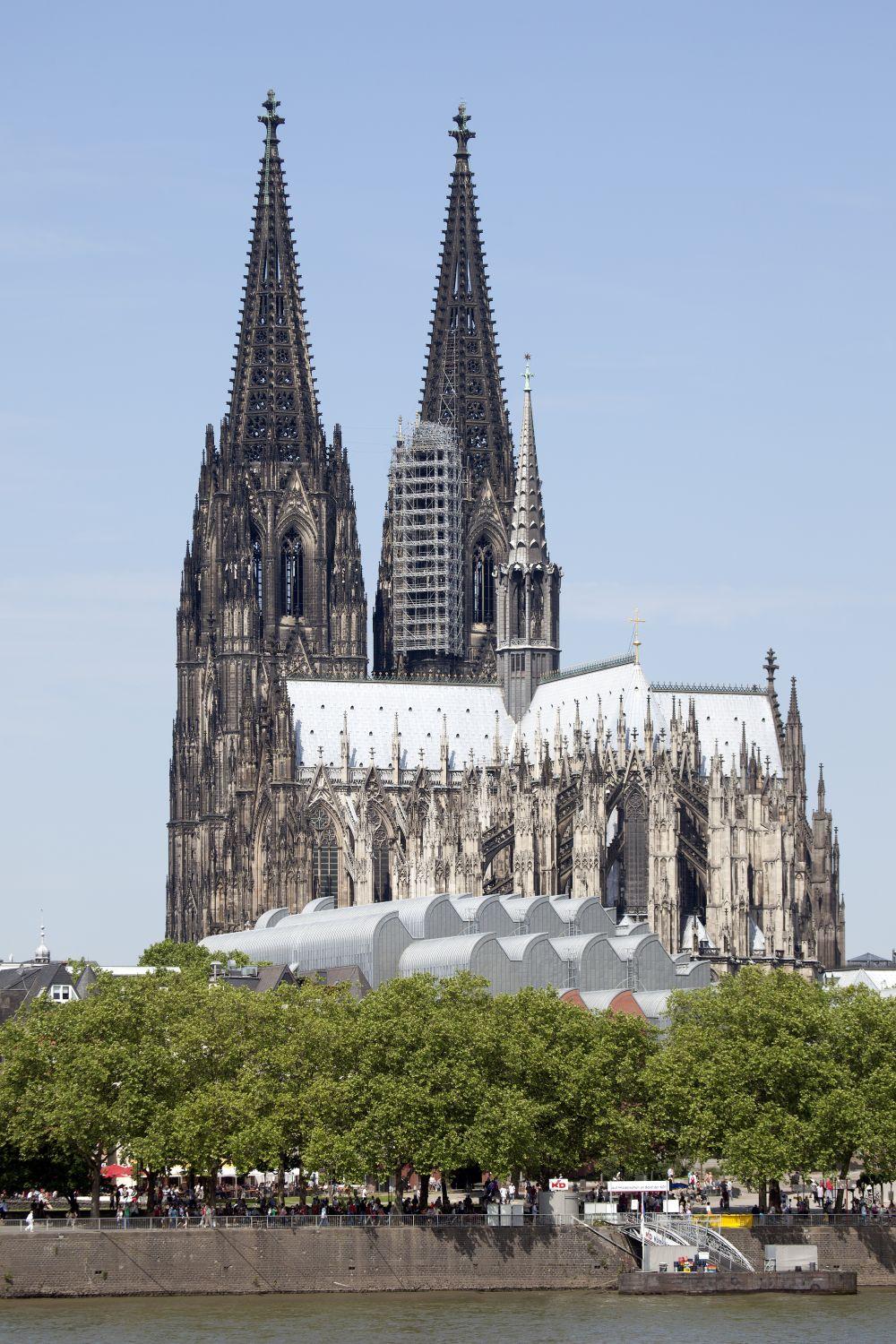 View from the Rhine to Kölner Dom 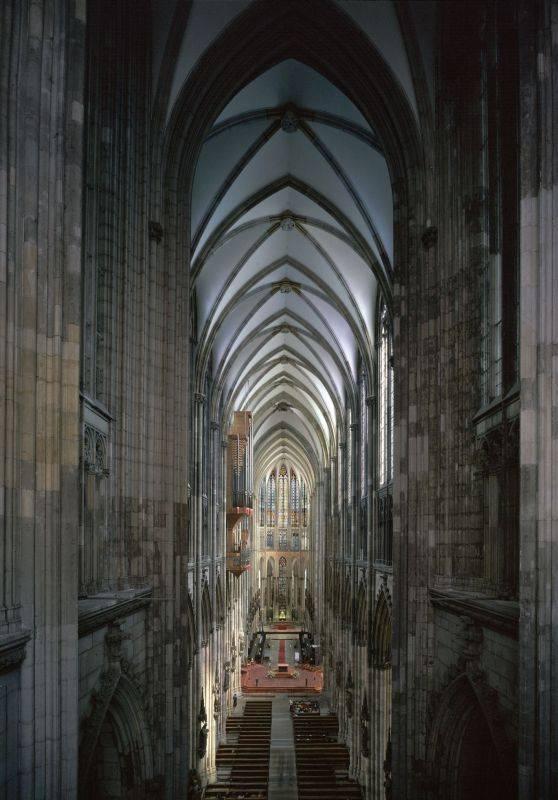 Kölner Dom - View from the gallery to the east 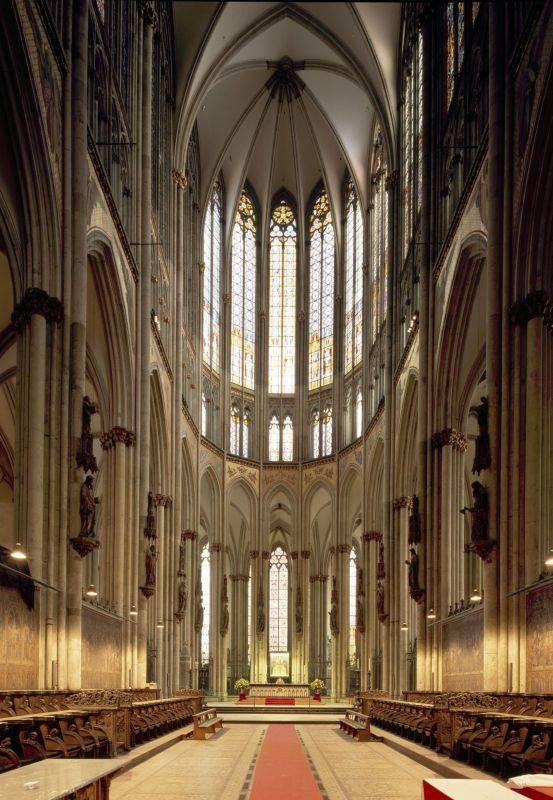 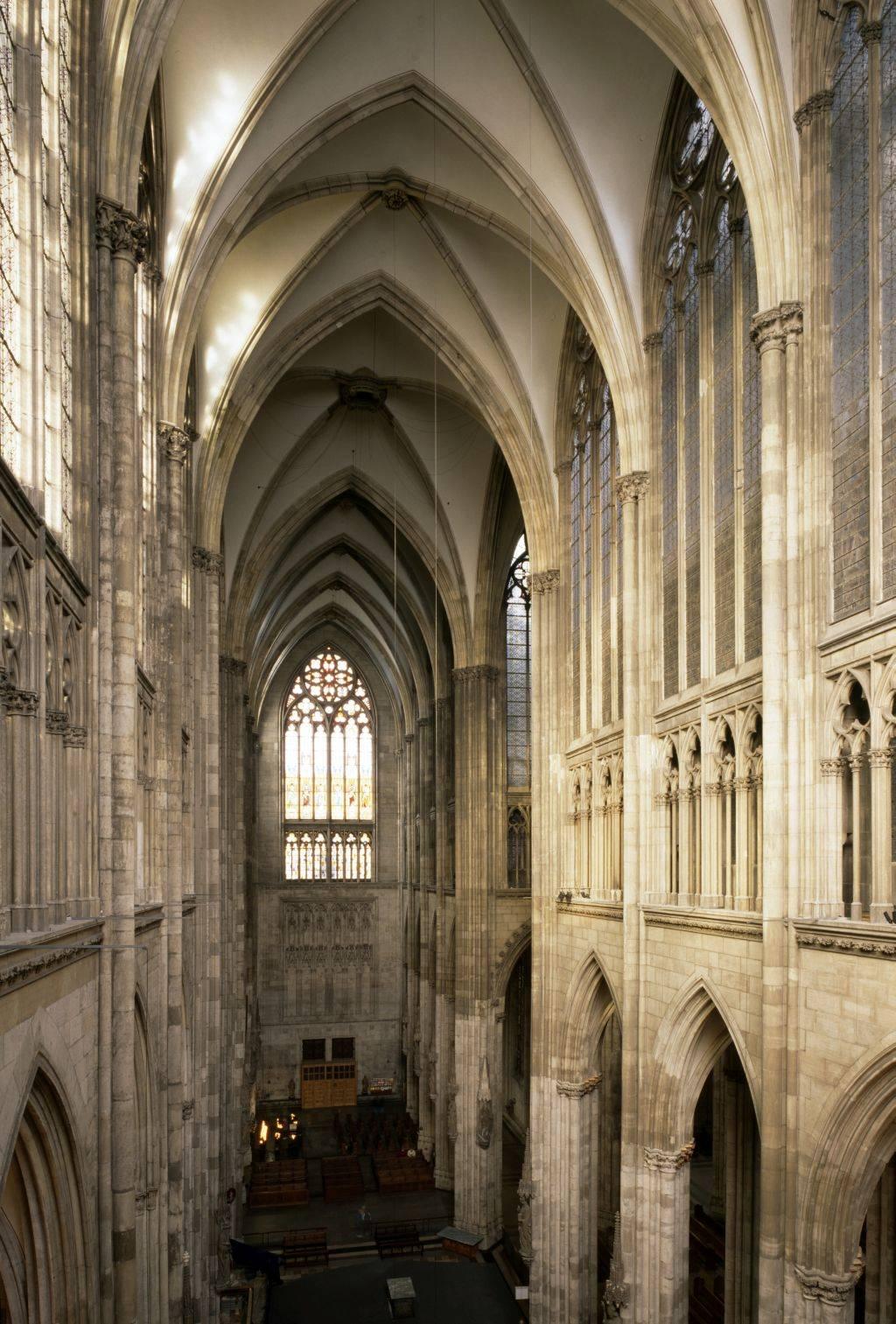 View into the north transept 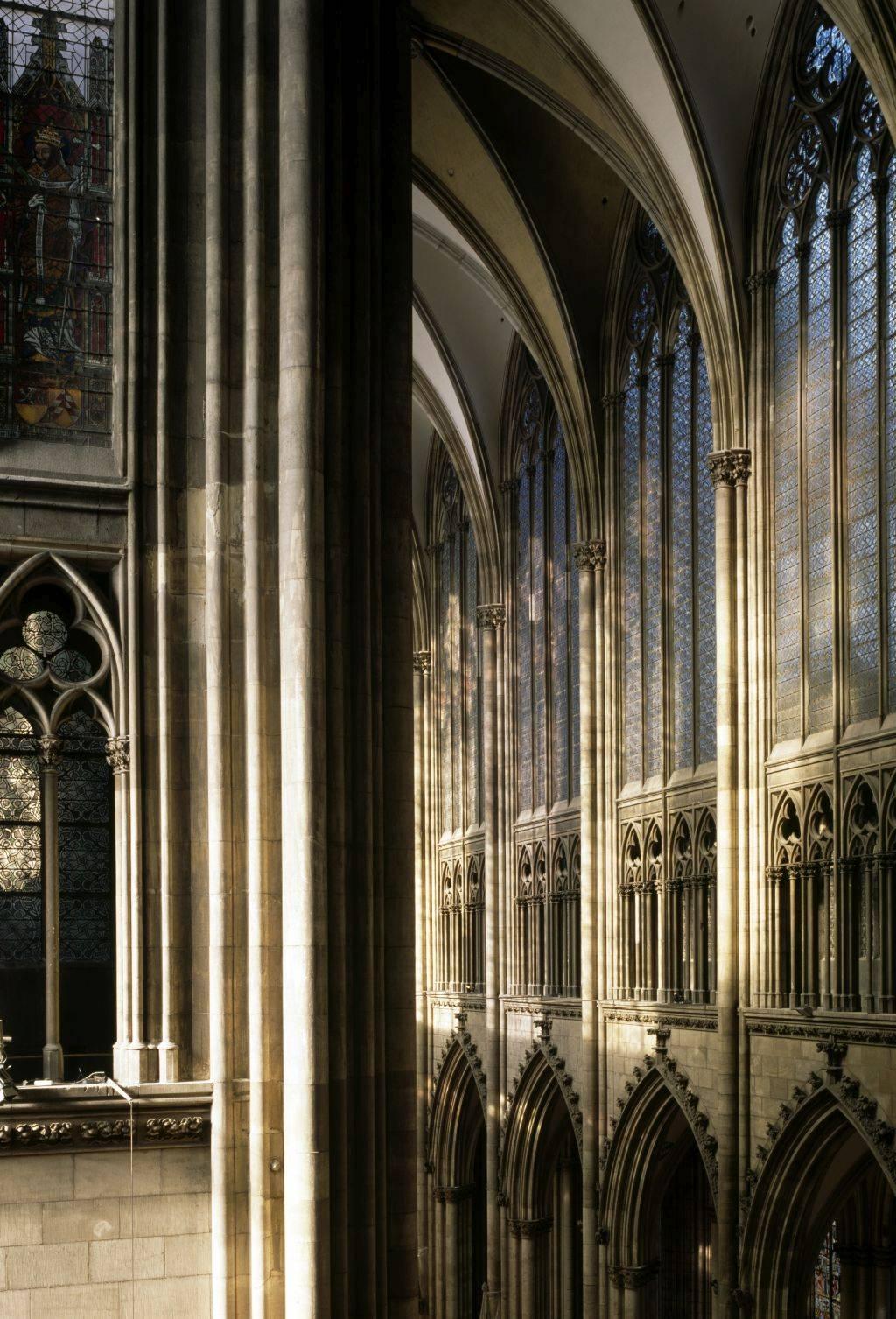 View from the triforium into the central nave View from the ambulatory into the south aisle 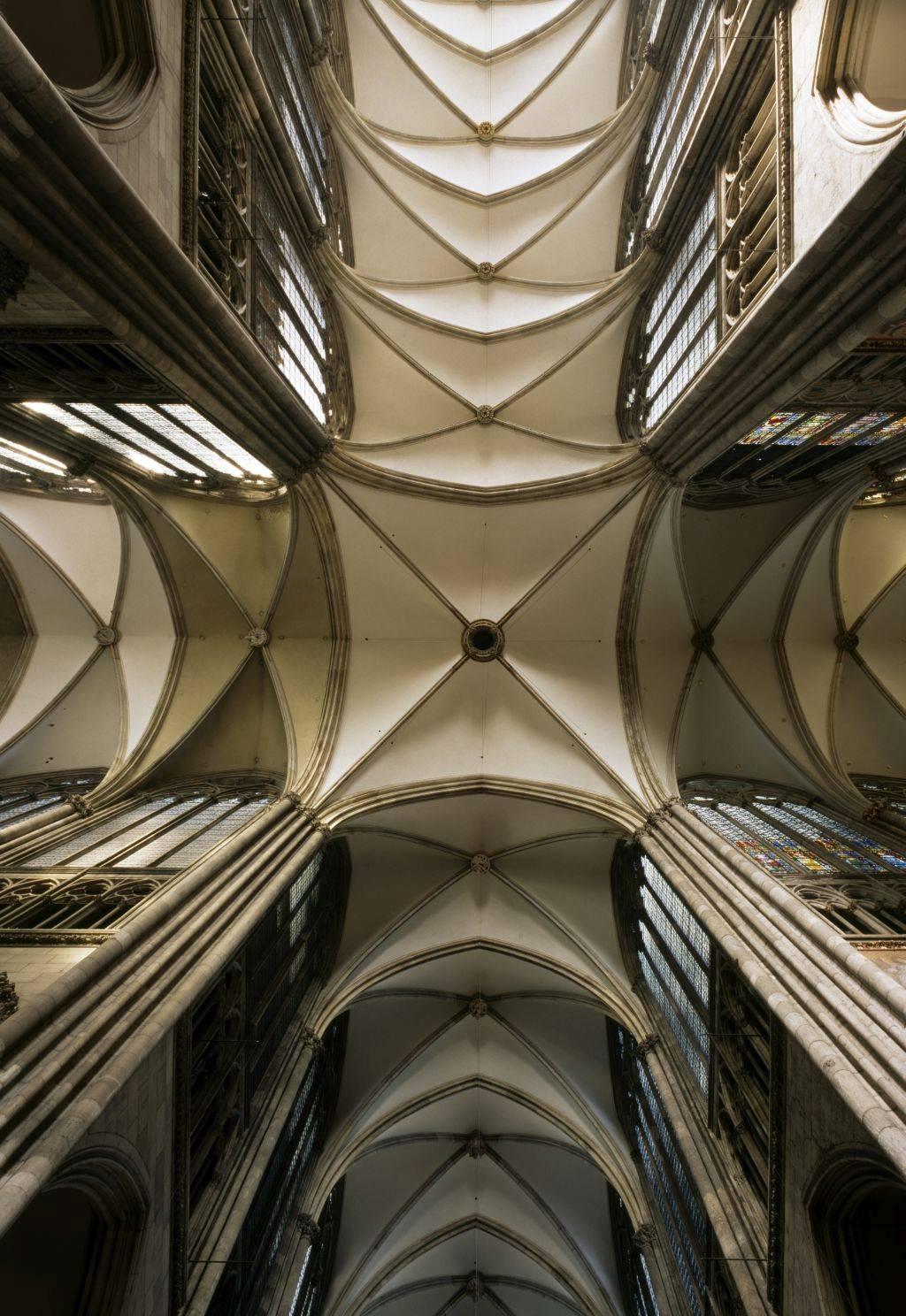 View into the crossing vault 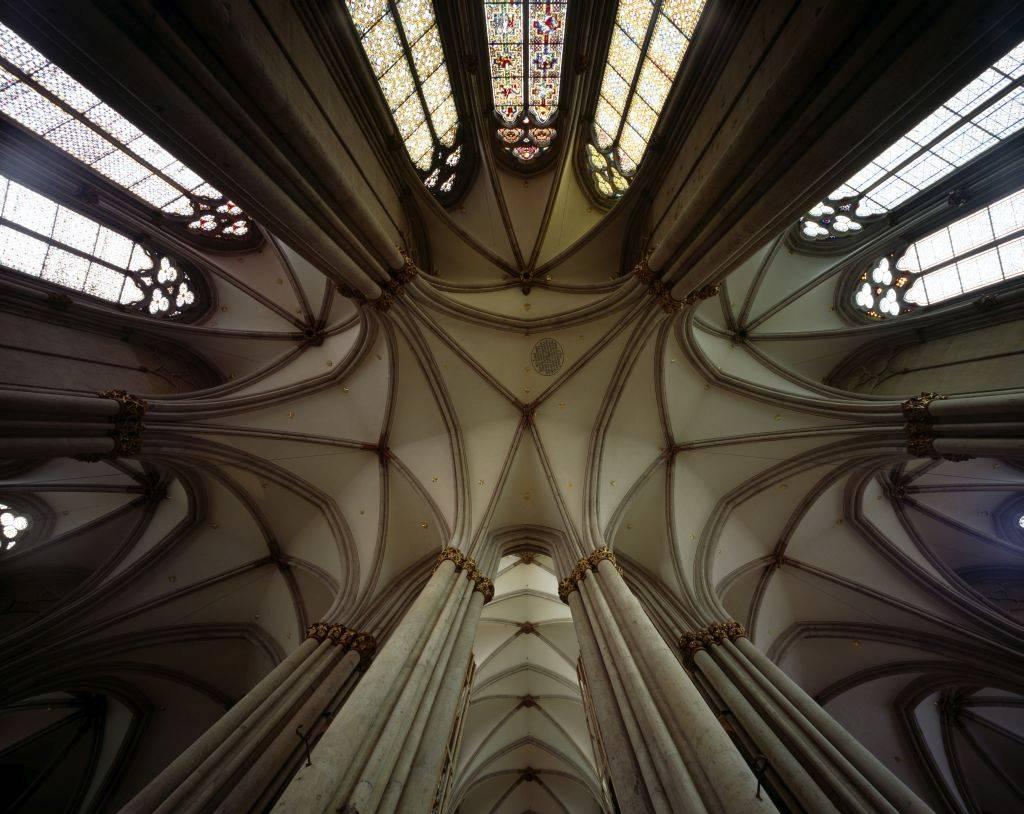 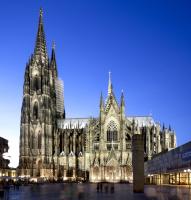 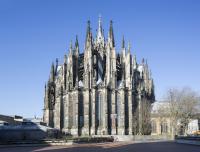 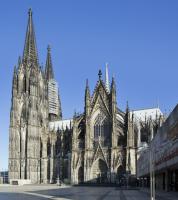 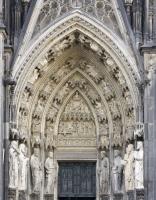 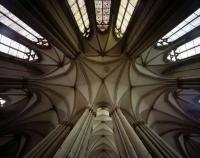 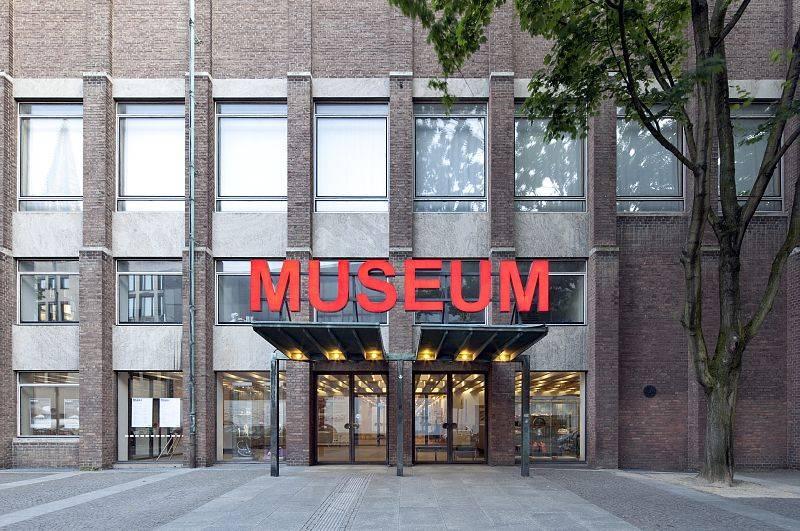 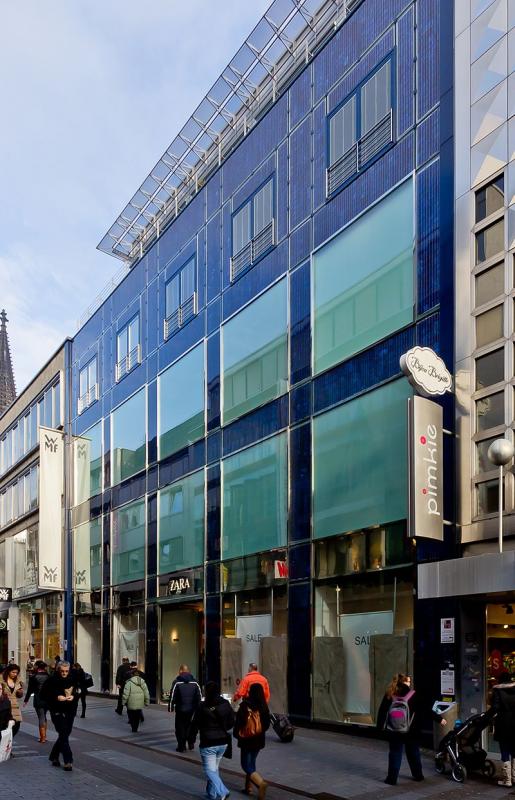 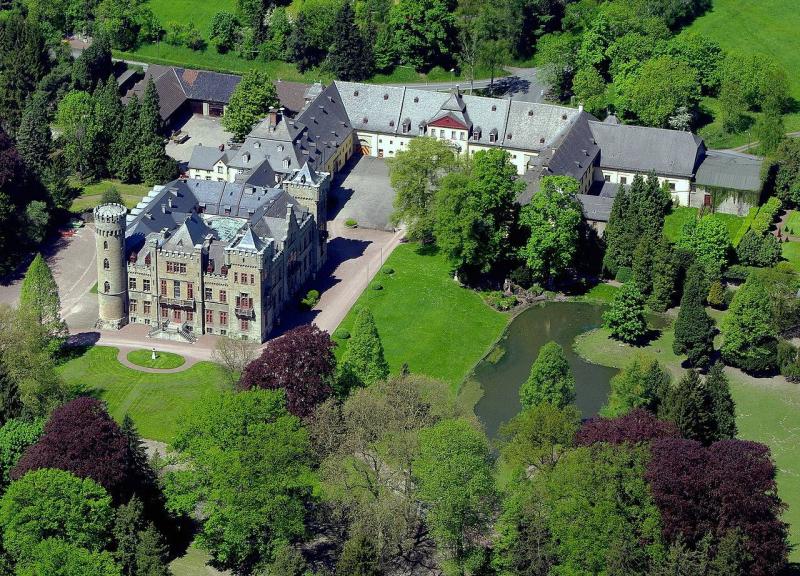 The story of today’s cathedral began when the Three Magi’s’ relics were shipped from Milano to Cologne since about 1225 these led to the plans for a new cathedral for reasons of space. The Gothic building was begun on August 15, 1248, according to plans by cathedral architect Gerhard von Rile. The main material was trachyte from the Siebengebirge. The choir was consecrated in 1322. In 1410, the south tower reached the second storey; soon after, the first bell was hung in the wooden bell frame (“Dreikönigenglocke“ from 1418). At the end of the 15th century, construction slowed down. At some time around 1510, construction was brought to a full stop for a lack of money and increasing indifference. In 1560, the chapter stopped payment altogether. For more than 300 years, the unfinished cathedral with the crane on the equally unfinished south tower characterised the city’s silhouette. In 1814, the first half of the 4.05m revised facade plan by Gerhard’s second successor, Arnold, was rediscovered by Georg Moller in Darmstadt, the second in 1816 by Sulpiz Boisserée in Paris. On September 4, 1842, the foundation stone for the resumed construction was laid by the Prussianking Friedrich Wilhelm IV and coadjutor and later Archbishop Johannes von Geissel. The stone was immured in the south tower. In 1880, after more than 600 years, the cathedral was finished in accordance with medieval plans and the facade plan from about 1280. However, the facades of the transept are a creation of the 19th century, since no medieval plans were available. For the construction, cathedral architects Ernst Friedrich Zwirner and KarlEduard Richard Voigtel used state of the art methods, especially for the roof – a modern iron structure – and for the steeples. At 157.38m, for eight years the cathedral was then the world’s tallest building. The stones used weigh about 300,000 tonnes. At 144m, the nave is the longest in Germany and one of the longest in the world. At 43.35m, the vault is the second largest in the world. The cathedral was hit by 70 bombs in WWII. Some vaults caved in, especially in the nave. Thanks to the iron structure, the roof never did. In 1948, the 700th anniversary of the laying of the foundation stone was celebrated in heavily damaged cathedral. From 1956, it has been used as a church once again.

Author: This article is based on the article Kölner Dom of the free encyclopedia Wikipedia and licensed under the terms of the GNU-Lizenz für freie Dokumentation. You can find a list of the authors at Liste der Autoren.
Last changed on 16.09.2021